芝加哥雾天即将消失 Thank the polar vortex for a foggy June

If Chicago’s lakefront has felt more like San Francisco lately, that’s one more thing you can blame on the polar vortex. 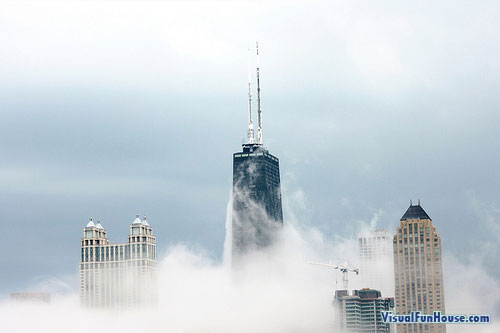 oans might have imagined they saw the Golden Gate Bridge rising out of the fog downtown this week. Following several consecutive foggy mornings, Chicago has had 32 hours of fog and low clouds this month — quadruple normal levels, according to the National Weather Service.

The moisture and chilly air are another lingering effect of the past winter, which was the coldest December to March on record, and the third snowiest winter, Senior Meteorologist Gino Izzi said.

Sub-zero temperatures covered a record 93 percent of Lake Michigan with ice this winter. That left the lake colder than ever this far into summer. The mid-lake reading east of Milwaukee was only 40 degrees on Tuesday, compared to an average temperature of 62 for the last week of June.

“That’s pretty incredible,” Izzi said. “I’d say the cold winter is likely playing a role in the weather of the past week or so.”

When easterly winds push high humidity over the cold water, that’s a fog machine that blows cool moisture over the city.

But today may be the last day of that pattern. The summer sun is ready to burn through the mist this weekend and push temperatures close to 90, especially Sunday and Monday, forecasters said.

Long-range forecasts for the summer suggest this could be a cooler than normal season, but Izzi admits those models are often wrong.

So far, as measured officially away from the lake, at O’Hare International Airport, June has actually averaged 70 degrees — two degrees warmer than average.